Here’s What’s Popping in Your Neck of the Woods

* Two episodes of Doctor Who have been found, having been assumed lost for the last few decades. Ironically it was Sam that came back to give us the episodes and not the Doctor himself. (That was a Quantum Leap reference in case you’re confused.) [io9]

* I’m not the only one that sees Twilight as poorly written, poorly acted dribble – George Takei does, too! Watch Takei fearless vent his true feelings on the franchise, all while brokering peace between Star Trek & Star Wars. Oh, my!

* Struggling to get in to the holiday spirit? Perhaps this list of 30 Science Fiction/Santa mashups will help. Listen, if Greivous can become one with Christmas, love, and the joy of giving, than so can you. [Blastr]

* Someone has decorated the escalator in the Tel Aviv City Hall to run the entire Star Wars intro story while the stairs incline up. Now we just have to get John Williams pumped through the Muzak service.

* In a recent interview, Steven Spielberg revealed a more sinister side of E.T. Originally based on the Kelly -Hopkinsville Encounter, what became a loveable, Reese’s Peices alien was at first planned to be a mean, green goblin extraterrestrial and was based on a small town’s real life experience in 1955. So, riddle me this, Speilberg: Why, oh why, did you insist upon changing the policemen’s guns to walkie-talkies if the account of the living, breathing aliens were, in fact, actually shot? [Huffington Post]

If you haven’t heard of the Kelly-Hopkinsville Encounter, I highly suggest you at least Wikipedia it. It’s a brief, interesting read, great for a break from work. 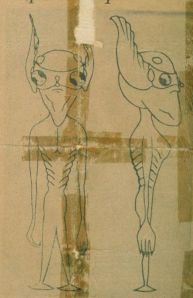 * Fashion is finally headed my way with Mordor inspired nail art. One nail to rule them all and with the middle, flip them. [BuzzFeed]

* The trailer to Battleship the Movie. Yes, based on the board game. And, yes, starring the classically paired stylings of Rihanna and Liam Neeson.  [MTV Entertainment]

* Lionsgate has decided to do yet another remake of American Psycho. Apparently because Christian Bale’s brilliant performance in the 2000 remake wasn’t good enough. Lionsgate is looking to make a “…modern day adaptation…”, to which I, again, refer to the 2000 remake. Also, this would be a re-remake, which is as sloppy as it is unnecessary. [ShockTilYouDrop]

* Want to make sure no one steals your iPad? Disguise it as an original Macintosh computer, something so outdated that people will believe ironic fashion has now become ironic technology. I recently got a similar disguise for my iPhone. Now people just assume I’m always carrying around a toaster. [MTV Geek]

* Louis C.K. is easily one of the top performers/writers/directors/comics in the U.S. right now. His self loathing seems to never get tiresome. And his newest special can be obtained from his website for a mere $5, leaving absolutely no reason to not indulge in a little C.K. [YouAintNoPicasso]

* I love Tommy Lee Jones. I really do, which is why I supported him when he decided to take part in Men In Black and its sequel. Now a trailer for Men in Black III has been released. There’s only so much of Will Smith playing himself that I can take. He played himself in Independence Day, The Fresh Prince of Bel Air, Wild Wild West, and now 3 – count ’em, THREE – Men in Black movies. I….I just don’t know that I can support Tommy Lee Jones any more.