*Scroll to bottom for Update and new photos of items.

There are 3 things you must know about Foreign and Domestic’s Saturday Bake Sales:

1. You absolutely should go, but go early.

This morning marked my second trip to the Foreign + Domestic Saturday Bake Sale. The first time I went was the first day they tried this baked goods masterpiece event. We got there a few minutes before opening and they sold out shortly there after, far before their 2pm closure time. Since that day Pastry Chef and Co-owner Jodi Elliott has streamlined the process, directing traffic in through one door and out through another. And as  there’s always a line, this is very helpful; people walk, bike, jog, and drive from all over the Austin area to score a Ham & Gruyere Croissant or mini buttermilk pie. 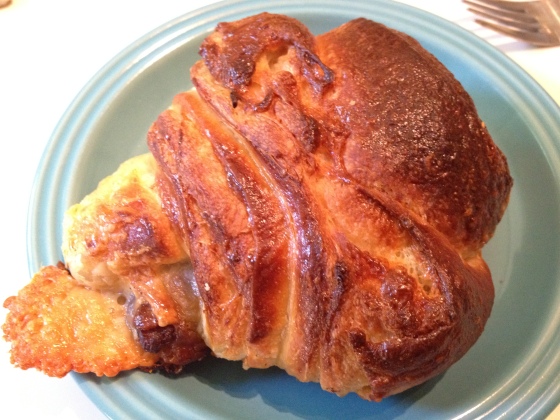 There are always a dozen or more options, which makes choosing – and keeping your pink F&D to-go box from over flowing – rather difficult. Most items are $6, though their Black Pepper & Gruyere popovers, a light and indulgent staple from their dinner menu, are $4 and all are very large and easily shared…if you really want to. These fresh baked offerings are frequently too delicious to warrant nibbles from others. Often they have treats in jars for $6 as well, including a chocolate trifle (rich, velvety, with notes of vanilla, extra dark chocolate, and espresso) , a peach cobbler polka spotted with fresh vanilla bean, and fluffy chocolate mousse.

There is always a good mix of sweet and savory, vegetarian and Ham filled (notice I capitalize the H in Ham the way most people capitalize the G in God), but different pastries rotate each week. Our first visit included a Strawberry and Cream Cheese buttercup and Tomato Mushroom Tarte Tatin, both of which were delicious, though as a lady that prefers items less sweet and more layered, the tomato tartin was complex in flavor as well as being light and a fantastic large snack for any time of day. Today I scored an exceptional Blue Cheese and Caramelized Onion Croissant; the creamy, aged flavor was carried throughout the flaky pastry without being overwhelming and the onions lent a sweetness that perfectly balanced strong cheese and the buttery and crispy dough. My friend Tania, who first told me about Foreign + Domestic, and can be followed through tasty food exploits at @td_eats, joined me this morning and purchased personal butter milk pie ($6, and could easily feed 3 people), and a cinnamon bun, with icing that flavor-fully complimented the sweetened cinnamon treat rather than overpower it. The buttermilk pie had an excellent texture, much like a fluffy cheesecake with a gooey center, and was very bright and fresh with extra vanilla and a hint of lemon.

Elliott knows what she’s doing and is exceptionally good at it. This is a fairly cheap brunch even for a Foodie Grazer and Experimenter, and you can taste the care and thought that goes into each recipe with every bite. It’s well worth the $20 you’ll through down for a decent tasting of treats and you’ll get more than enough food to feed 2 or 3 people. Highly recommend. It’ll be the the only line worth waiting in for you whole Saturday.

Went to the Bake Sale again today with a friend who just had a baby. What better way to get your strength back then to indulge in delicious pastry offerings?! Today was just like the other visits I’ve made to the Bake Sale: Excellent choices, incredible recipes, and cash only. I did notice, however, that after the usual intense burst of early birds, a line that always wraps around the building, the line really wore down to nothing at about 10:45am and there were still plenty offerings left. That being said, they do have a lunch rush so that window of opportunity can be fleeting. I wanted to show the reader, however, exactly what you can get for $20. 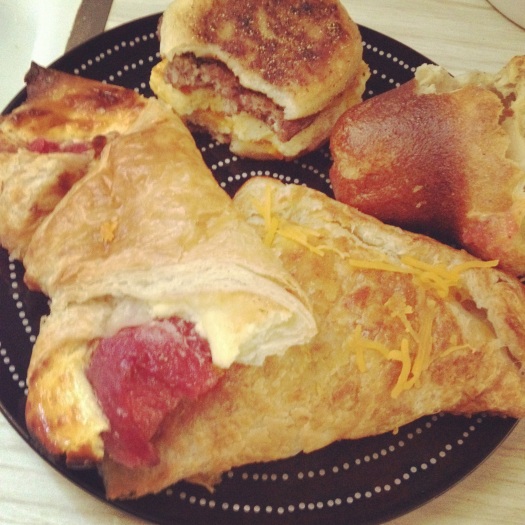 Please excuse the bites taken out of a couple of pieces above.

Also, please note that they are not sitting on a regular plate; they are on a platter.

What I purchased this pat Bake Sale was a strawberry cream cheese danish, made with fresh strawberries and it was HUGE, see below. It was more sweet than savory, but because the strawberries were fresh they weren’t too sweet, and the cheese was more tangy than sugary. I’m not normally a fan of “sweet” nor danishes, but this was created in perfect balance. Rather than eating a bit of dessert for breakfast, the freshness of the berries and creamy cheese counter against the flaky and buttery dough.

There’s also a ham & cheddar turnover that was massive and flavorful with thinly sliced ham and a thin spread of mustard on the inside. The turnovers where new and they offered the classic sweet apple as well as the ham. There were also sour cream donuts, that, like the danish, balanced sugar with intense flavors that made it far more in depth than merely sweet.

I  purchased a sausage breakfast sandwich, which was kept from being messy, by the ingenious method of cooking the eggs. While the sandwich itself is very, very large, it’s easily sharable, cutting in half does not cause the layers to fall apart and, as a Neat Freak as well as a Foodie, this is something I appreciate. The eggs are light and fluffy, and have been baked almost in a Yorkshire Pudding like way. If you notice above, it’s classic biscuit followed by a richly flavored sausage – I’m not normally a fan of sausage, but this was sweet and savory, absolutely delicious – and then another layer prior to the bottom of the biscuit. That layer is the whipped eggs, keeping the sandwich from sliding around on a round egg top and making sure that the eater gets a bite of white and yolk in each nibble. And, and finally, there’s a gruyere and black pepper pop-over.

The above plate cost $20 exactly. It fed myself, my friend (who has quite the Saturday brunch appetite), and we still have plenty of left overs to get us through brunch today. Though, if it were up to me, I wouldn’t stop eating that danish! I had brought friends to F+D with me on this trip and they, too, were blown away, asking before we left that we make sure to visit F+D regularly from now on. 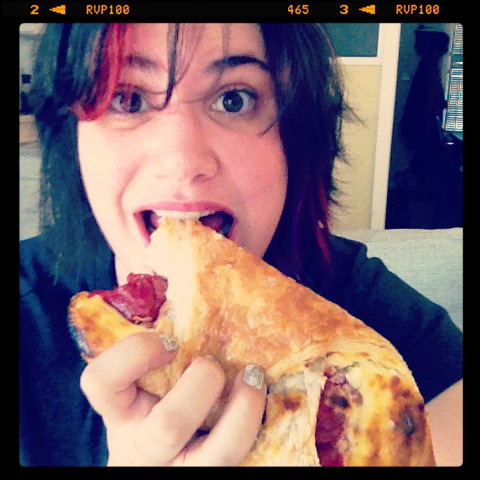