I heard about this little trailer in a recent BBQ write-up featuring numerous places in the Austin area. Opened only right around 9 months, the critic reviewed Micklethwait Craft Meats as “..the next Franklin’s.” And that’s something any self-respecting Austin resident doesn’t ignore.

We headed down to their location near Hillside Farmacy about 11:15 am on a Saturday. They’re located at 1309 Rosewood Ave., near east 11th. There was little to no parking in their tiny lot, but no line for their food, either. Quite the contrast to Franklin’s just down the street. The yellow painted trailer and impeccable picnic tables were a welcome site, surrounded by trees on a sunny morning. It’s a great little spot for what would turn out to be the best bbq I have ever had within Austin’s limits. 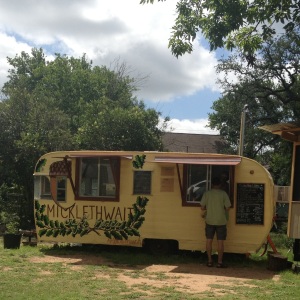 We ordered a half pound of brisket, 3 pork spare ribs, a side of jalapeno cheddar grits, cole slaw, a pork belly sausage, and a homemade Moon Pie. The total came to just under $30 and was more than enough food for 3 people. They accept both cash and credit cards (yes, their Facebook page says Cash Only; this is incorrect, coming from their people directly). I’m in the mood for BBQ about once a month…maybe once every 6 weeks. I’ve been killing to go back to Micklethwait’s since I first bit into their brisket. And it’s only been 3 days. 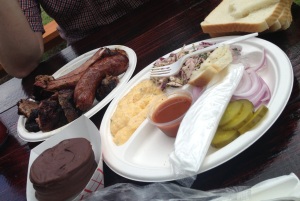 Their meat is sold by the quarter pound. This makes getting ribs a little awkward, I tend to order them by the number, “I’d like 47 pork ribs in my face right now, please”, but their customer service is stellar and they were patient with my less than perfect order style. All meat is about $13 a pound, rather than different prices for different cuts, and they also do plates, but I’m a choosie kind of girl when it comes to my Q and just order by weight. Their sides are $1.50 a piece and their cheesy creamy cheddar jalapeno grits were AMAZING. Perfect texture, not too salty, very flavorful and creamy, and an excellent compliment to their meat. The cole slaw was homemade as well, bright, a little citrusy, but paled in comparison to the grits. 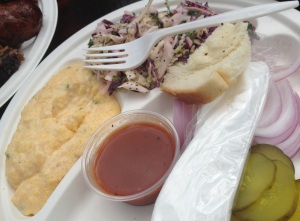 The meat. Holy crap, where do I begin? I’m an opportunivore when it comes to love. I’m not biased for men only or women or dinosaurs. If something is worthy of true love, it earns mine – but it must be worthy. And Micklethwait’s brisket is sooooo worthy. Tender, juicy, perfectly seasoned, flavorful and perfect. They give you a little cup of sauce, but you don’t need it. If someone told me Micklethwait’s brisket was actually Solient Green I wouldn’t love it any less (or, rather, Soylent. Thanks, Dave). It’s THAT GOOD. Their ribs were big and meaty, and so juicy that I took video of the juice dripping out of the pork as I went to take a bite. That’s love right there. Now, I’m not a huge sausage fan. If it’s not a jalapeno cheddar brought out of New Braunfels I probably won’t eat it, but their pork belly sausage was very tasty and a nice change of pace to the usual merely spicy or overly-greasy BBQ joint sausage. 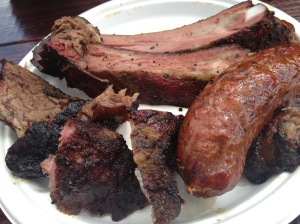 We ended the meal with one of Micklethwait’s homemade Moon Pies. Flaky, sweet, moist, and creamy, not to mention massive, it was an excellent ending to a fantastic meal. I’m not sure these are the best for a hot summer’s day because the chocolate does get messy, but they come out of a cooler all nice and chilly, and the sweetness cuts through the savory meat flavor, perfectly rounding out a great meal.

Is it better or as good as Franklin’s? Well, them’s fightin’ words and it’s too early in my young years to get into that kind of debate. What I can say, however, is I have no problem skipping the line at Franklin’s and hitting up this joint and I certainly don’t feel I’m missing anything. I no longer have to drive to Lockhart or stand around on hot pavement for three hours to get great brisket and ribs. I can get incredible Q right here in Austin from a food truck and not have to take a half day from work to do it, provided Micklethwait is open. And I believe it will only be a matter of time until they either have to expand or start running out of food early in the day due to popularity. Bottom line is they’re just that good.

UPDATE: I went with coworkers for lunch today. I got a single huge 1/3 pound pork rib, a 1/4 pound of brisket, 2 bottles of water, and a small side of grits. Myself and a male friend split the meal and the entire thing was $11 with tip. 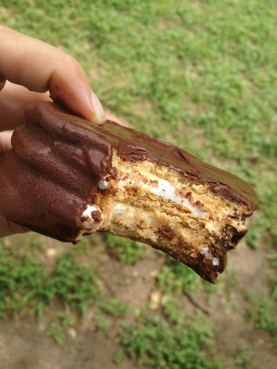 Should Solient Green be Soylent Green?

Doesn’t matter provided it’s people. Or this brisket. (And only if I can write “Soylent” and not be sued for copywrite infringement.) 😀

[…] are just about the only reason I stop in there any more. I no longer have to get out there. I love Micklethwait Craft Meats. They’re incredible, but they’re busy enough now where they’re going to need a […]