In his episode The Proof is in the Bread Pudding, Alton Brown makes a spiced pudding in a bread crust, and a second chocolate version with chunks of challah bread in a pyrex dish. If I was going to attempt this whole bread pudding thing I’d want a custard that was rich and flavorful, had a relatively simple recipe and task list (i.e. pyrex over a perfectly carved crust basin), and perfect texture rather than just damp bread. I decided to balance AB’s two recipes, switch a few items, and add chewy Craisins and Ghirardelli chocolate chunks for texture.

Place the cinnamon, nutmeg, dried orange peel, cloves, peppercorns, and ginger into 3 cups of half-and-half in a microwavable container and microwave on high for 3 minutes. Check the temperature of the mixture and microwave in 30 second increments until it reaches 180 degrees F. Cover and steep 15 minutes.

Place the eggs and yolks in a blender with an 8-cup carafe. Blend on the lowest speed for 30 seconds. Raise the speed to quarter power and slowly add the sugars and blend until thickened slightly, about 1 minute. Add the remaining cup of half-and-half. With the machine still running, pour in the spiced half-and-half through a small hand strainer and add the rum. Use immediately, or store covered in the refrigerator for up to 36 hours.

Butter or non-stick spray a 9 by 13-inch metal pan and place the cubed bread in the pan. Sprinkle the chocolate chips and dried cranberries on top of the bread and slowly pour in the custard. Press down on the mixture with a spatula or the back of a spoon (or your hands) to thoroughly saturate. Cover and set aside at room temperature for 2 hours, or refrigerate for up to 8 hours. You can do this the night before if you want.

Preheat the oven to 325 degrees F.

Bake about 40 – 45 minutes. If you’d like your top extra crispy, set your oven to the high broil setting with the oven door slightly ajar. Remove the bread pudding from the oven. Pour the melted butter into a spray bottle and spritz the top of the bread pudding or brush on melted butter carefully. Return to the middle rack and broil for 4 to 5 minutes. Remove to a cooling rack for 15 minutes before serving.

I served mine with vanilla ice cream and leftovers kept for 3 days in the fridge. 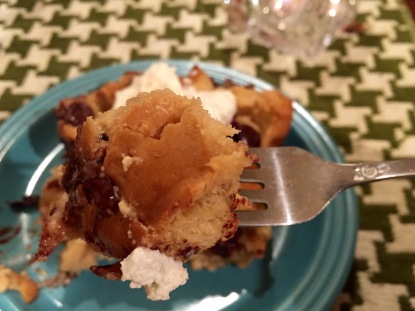