Whale of a Fear

I’m horrible to watch Antiques Roadshow with. I find myself shouting at the screen a la Indian Jones, “That belongs in a museum!”

And this really is the core of my being: I am excited by old things, find them amazing, fascinating, want them to be accessible to all, and want to get others excited about these objects as well. To learn is to better one’s self and I’d love to write and educate, to spread enthusiasm for something in my daily career.

There are 2 things I want to do with my life. To the average person, they’re very mundane. But to me, however, they’re the equivalent of becoming a rock star.

1. Write lesson plans in accordance to state regulations for historical societies and museums in order to entice local schools to take field trips to such establishments.

2. Work and write for Cook’s Country/America’s Test Kitchen, working as an Ethno-Foodologist or, even better, a Food Archeologist.

When I was in junior high and high school I would skip class about once a month or so. None of my friends would ever want to join me and my parents were always very supportive of these escapades. You’d think I had egghead friends and that’s why they wouldn’t skip, or that I had hippy dippy parents that would allow me to be so flagrant about my education, but neither was the case. Well, my mom could kinda be hippy dippy, but that’s a different story. When I decided to skip school I would get a ride to the train station and take Metro North to Grand Central Station. Exciting, right? Who wouldn’t want to skip school to hang out in The City all day?! I would then walk up Park Ave. to The Metropolitan Museum of Art. Or I would head west across the park to the American Museum of Natural History (or what’s know as the Museum of Mother Fucking Awesomeness by its fans) and I would spend hours and hours reading in silence, smiling over beauty…with the periodic stop off at the Central Park Zoo to finish the trip. I did this over and over and over again.  In high school I was fairly popular, I was certainly no prude, and the most epic parties were normally hosted by my brother or I. But when it came to what I really wanted, it was historical solitude. I would have shared that time with others, allowing them to tag along, but who cared for those things but me?

I’m extremely fortunate in the sense that I’ve been to the museums of NYC so frequently that I can’t even count the days spent in their ancient and loving embrace. Dozens of times? Definitely. Hundreds? Very possible. I’ve moved away from that area a couple of times since graduating high school and being unable to take advantage of those museums is always the number one issue that I have when living more than a train ride away. I guess I miss my family, too, but I really  miss those museums. In fact, when I visit my family, a jaunt to a museum in NYC is always one of the first afternoons planned. I am not so ego maniacal to ever think I could work at the Museum of Natural History or the Metropolitan Museum of Art. In order to do something like that I would have had to make all the right moves, and absolutely no mistakes, in the professional decisions of my life. The employees and curators of those establishments are my heros, my Steven Tylers and Brad Pitts. Unfortunately, it seems I’ve done the opposite of not making professional blunders thus far in my life. I’ve created quite the resume and educational experience with not one, but two degrees under my belt. They’re just as far from the museum and/or food path as humanly possible. Awesome.

The first time in memory of going to a museum, I was about three years old and with my parents and brother. We headed out to the Museum of Natural History. My brother and I never really got along very well, and on trips like this we were more simply in the same place at the same time rather than actually experiencing something together. We walked passed the dinosaur skeleton in the entry hall and made our way around the mammoths and the naked, hairy neanderthals with the droopy boobs. This was prior to the Rose Center, otherwise we would have probably made a bee line for the giant glass box of Space. The favorite at this time, however, was the Great Hall. The Great Hall is massive, primarily so it can fit the life-sized model of a blue whale. It’s romantically lit, and by that I mean, that it’s somewhat dark, like the depths of the ocean. It consists of two levels with marine life exhibits lining the walls and a large open area in the center, from which one can admire the whale.

There are two things I remember from this day, one of my earliest trips to the AMNH:

1. Being horrified in the Great Hall by this massive whale that was going to crush and/or eat me at any moment while…2. George Michael’s Careless Whisper played over the loud speaker. I mean, yeah, technically it was a Wham! song, but, c’mon, it was all George Michael and that damned whale. My mother said she heard “teeny, tiny pounding feet” and turned to see me flying toward her staring over my shoulder at the whale, horrified. And what self respecting toddler wouldn’t be? Even at that young age I knew anything from above could crush you below, both literally and figuratively.

It’s a hazy memory, but it’s very real, and it didn’t just end with that day.

I then proceded to carry around a fear of being in an ocean for years. Playing in the surf = good. Playing far enough out where water could go over your head and therefore allow you to be crushed from above by a whale = bad. It wasn’t until I was in my twenties that I could picture myself getting out of a boat and into open waters. I wasn’t afraid of whales, so much as being in water with them. I grew up along the north eastern seaboard, so going whale watching was a common activity. I respected their beauty and their power. And their ability to crush me in real life in the ocean or as a giant model in a museum.

Soul inhibited experience or no, I knew to differentiate my fear from what actually caused it and not where the experience occurred. Loosely translated: I didn’t blame the museum for this silly fear that followed me around for a couple of decades.

And to this day I want to be apart of some historical and educational organization that learns from and loves the past, whale or no. 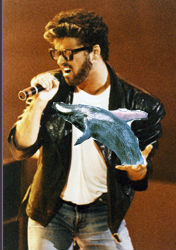