I wanted something special for holiday dessert this year, but I am not normally a treat maker. I often have prewrapped chocolate in my house, a box of Skinny Cows, or, if I’m really feeling an indulgent dessert, I’ll make cookies, but it pretty much stops there. I tried twice in my life to make pies and both ended terribly: At high altitude I couldn’t get my apples to cook after being in the oven for two hours, and on a torrential downpour day, my pecan pie came out as mere ice cream topping rather than anything even close to solid.

So, naturally, I choose Christmas Eve when I’m hosting guests to try an intermediate level recipe I’ve never tried before. No practice, no nothing. If it didn’t work out, we’d be having Rolos for dessert.

I have to admit, I’m not super clear on the whole rating the level of difficulty in a recipe thing. I mean, you follow the directions. Tweak it if you’re gutsy. There’s either less directions or more directions and all you have to do is follow them. Really, I think recipes should just be based on time, such as less time or a crap ton of time. Because you’re supposed to refrigerate a cheesecake for a while, this would get a Crap Ton Of Time rating.

This is more of a chocolate mousse cheesecake; it has cottage cheese in it. That’s not the norm, no, but I hate eating a slice of cheesecake and then immediately feeling like I’m about to have a baby because I’m so full and fatty-fat  fatfat. And this one comes out sweet, but not sugary, fluffy, but very cheesecake-creamy. Amazing with coffee. And I realized the the problem with lighter cheesecake is it’s hard to stop after one piece… 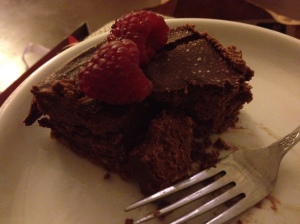 I think I had consumed so much food at this point that I was lying on the floor, but, like a champ, this didn’t deter me from another slice.

Like all good cheesecakes, this one begins with water. I preheated my oven to 325 and placed a roasting pan filled with about 2 inches of water on the second to last rack level. I went out (prior to heating my oven), bought a spring-form pan, took it apart, played with it, struggled to put it back together (I’m no winner), and then coated the inside with cooking spray. I also wrapped the outside bottom edge in aluminum foil to stop any of our cheesecake filling from leaking out.

Next came the crust:

Crushing the graham crackers is a great task for kids to do. Or, if you harbor any ill will toward mankind, it’s a great way to work that angst out, as well. In my case I improvised a giant pestle and mortar and worked out regular holiday tension.

Wine bottles: Not just for Boozing it up any more. They make good rolling pins & great pestles.

I mixed everything together until moist and pressed it into the bottom of the spring-form pan. The recipe then called for the crust to be frozen for 15 minutes, and who am I to argue? I was doing this while watching Ancient Aliens on Netflix anyway, so it’s not like I didn’t have other things going on.

Next was the filling:

2/3 cups Ghiradelli bittersweet chocolate chips. The recipe called for 2 ounces of semisweet chocolate, but I like bittersweet and who the hell knows what the measurement of an ounce of chocolate is? (I do. It’s about 1/3 cup to every ounce.)

I’m starting to get bored now. Someone put on the Never Ending Story.

2 tsp instant espresso powder (Don’t skip this. Use decaf if you’d prefer, but this really intensifies the chocolate.)

I pureed the cottage cheese with an immersion hand blender. I then poured it into a kitchen aid mixer so that could do the rest of the blending for me. Often you can use a food processor to really make your cheesecake SUPER smooth. I am neither smooth nor the owner of a food processor, so I used a stand mixer. To the cottage cheese I added the cream cheese and then all the dry stuff. Once that was blended smooth, I added the egg & whites, the vanilla, melted the chocolate in the microwave and added that, too.

I poured the mixture onto the crust in the pan and into the oven it went (with the roasting pan of water still in there) on the upper third rack and baked it about 50 minutes, until the center jiggled like my gut. Then I let it sit in the oven for an additional hour with the heat turned off.

After that time I plated the cake and poured a ganache over the top.

1/2 cup semisweet Ghiradelli chips. Yes, I used semi-sweet instead of bittersweet for the ganache and there is a difference.

Microwave the butter and chocolate together until melted and smooth. Pour over cheesecake. Viola.

After I let cool at room temperature for an additional hour, I put the cheesecake into the fridge. The final step, according to the original recipe, which I’d long since ditched, was to refrigerate for 8 hours or over night so it could really setup.

I let it chill for about 7 hours before it was time to dig in and it was great; no need for the 8+ hours. When plating I topped it with beautiful, sweet fresh raspberries and a dusting of powered sugar. I plan on having a left over slice for breakfast. 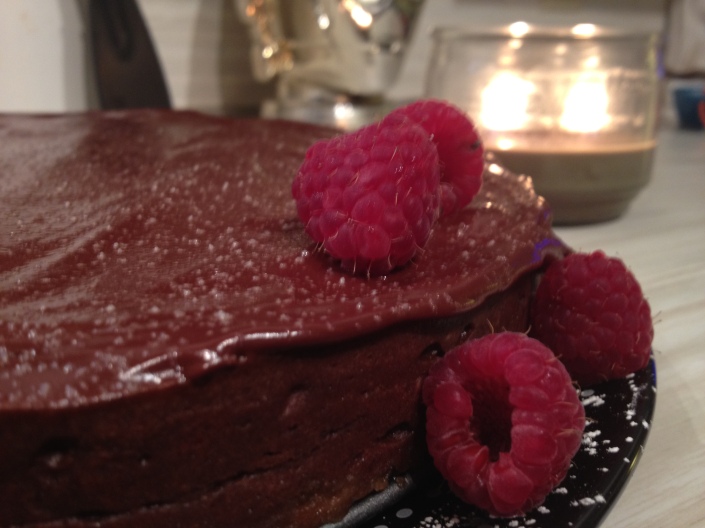