The evening’s dinner is brought to you by everything that’s bad and fatty for a human body. And delicious.

Quiche Lorraine is just a name.

The first time my husband ate this he wound up having seconds three hours later at 10pm in lieu of dessert. It’s heavy comfort food; a single slice should send you into a food coma second only to your family’s Thanksgiving feast. 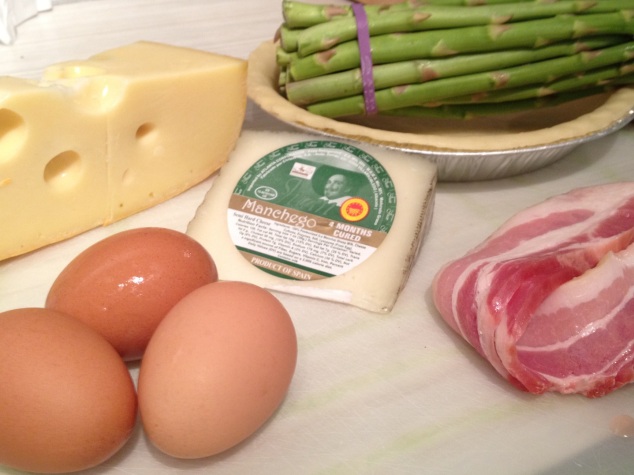 6 slices thick cut bacon, chopped to about 1 inch pieces. This winds up being just over 1 cup of bacon. You can also use pancetta, which is what I was going to get, but the line was just long at the supermarket today and I hate people, so I didn’t want to wait.

1 1/2 cup Swiss cheese, diced into 1/2 inch pieces. I just bought a hunk and cut it up, but you can also ask your deli for a slice or two that’s 1/2 inch thick, which is what I was going to do, but, again, the line, and the hatred of people, etc…

6 wedges Laughing Cow Creamy Swiss Cheese. I used original stuff, but use whatever flavor you would like.

1 cup asparagus, sliced into 1 inch long pieces on the diagonal.

2 deep dish pie crusts. I used the frozen ones and thawed them.

Preheat your oven to 375. Saute the bacon over medium to medium high heat stirring frequently; render the fat, but keep it soft. Once most of the fat has melted away, move the bacon pieces to a plate with paper towels to absorb any lingering grease. In a sauce pan, scorch the milk  and half & half. Turn the heat on high, let it bubble up to almost boiling over, and remove it from heat to let cool. Beat the eggs in a bowl with the spices, then slowly, slowly temper the eggs with the milk mixture until combined.

Prick the bottom of the pie crusts. Sprinkle the bacon into the bottom of each. Then add the Swiss cubes. Break, or smoosh, the Laughing Cow cheese as best you can and drop bits of it in each crust. Place the 2 pies onto a cookie sheet and put on the middle rack of your oven. While the it’s still pulled out a bit, pour the custard mixture slowly and evenly into each. Then bake for 20 minutes.

While the quiches are baking, steam the asparagus until just fork tender, about 3 minutes. Drain and dry well. Once the first 20 minutes of baking are up, pull the quiches out, sprinkle the tops with asparagus, and bake for another 15 minutes. You may need to put foil collars around the crusts of the pie crusts if you feel they’re browning too much. I put them on for safety, but it wouldn’t have been horrible without them. 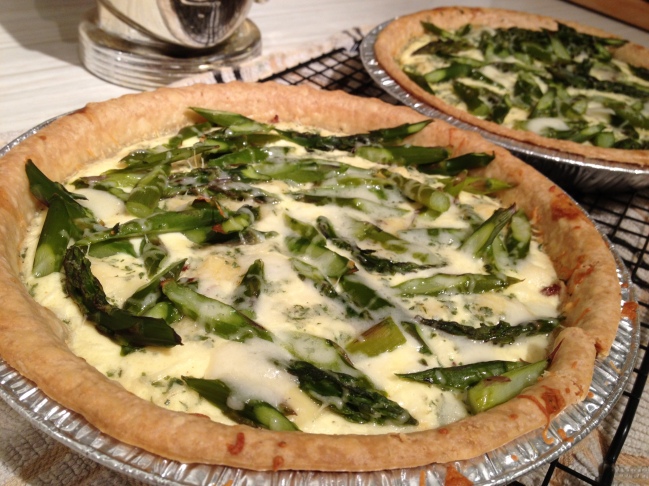 Once those next 15 minutes are up, sprinkle the tops of each quiche with a little of the Manchego cheese if using it. This is a sheep’s milk cheese from Spain and adds a beautiful bit of flavor without being as strong as a goat cheese. Continue cooking for another 10 minutes.

Cool for 1 – 1 1/2 hours. Yep. Let these puppies setup for quite a while. Serve with a salad mixed with sweet berries and a light citrus vinaigrette to accompany the bacony saltiness of the quiche. Maybe a dollop of sour cream, or creme fraiche if you have fancy-schmancy stick up your ass. And have a Leinenkugel’s with a wedge of lemon to balance every thing out. Why the hell not. 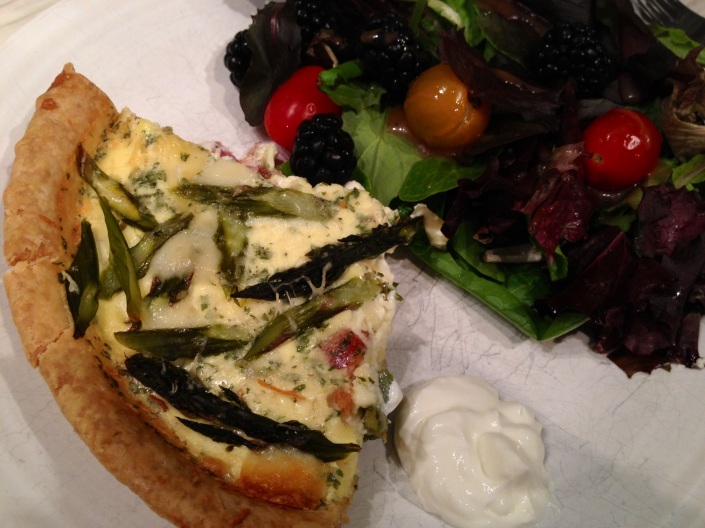