The Value of a Dollar

I chat throughout my day with friends online. We live in a world of almost constant communication and business never rests, so the opportunity for a lunch or break of any kind comes few and far between. Or not at all. The periodic chat with a friend helps break up the day without having to take more than a minute or two away from email. Helps morale. And some times, a good memory comes up.
______________________________
Patrick:  so tell me something
.
me:  Are you following that up with a question that you want an answer to, or are you asking me to tell you a story, joke, etc?
.
Patrick:  story
.
me:  Hmm….okay….
So, I’ve had glasses for more than half my life. The first time my folks allowed me to get a more expensive pair, one that I could pick out myself, however, was when I was about 15.

I was so excited and had waited for them to come in for, like, 2 weeks, which to a 15 year old girl is an ETERNITY.
I picked them up on a Saturday and almost immediately headed over to Joanna’s wearing them, much to the shargrin of my folks.
.
Joanna and I were going to camp in her back yard, in the sand of her volley ball court, which was surrounded by dense forest.
.
Patrick:  ok
.
me:  Our friend Jeremy lived next door, so he was having Tommy and Brendon over, and they were going to sneak out and camp with us – no hanky panky on my part, I was just good buds with those boys.
.
We go out, play all night, wrestle, talk, split a beer so we’re all “drunk”, play music, whatever. Kids crap.
.
I wake up in the morning and …
…where are my glasses?
.

Photo credit XPeria
Where are they?
WHERE ARE THEY?!
Fuck, they’re not here.
.
Oh, my god, my folks are going to kill me.
.
HOLY CRAP!!!!!
.
….but what are you going to do?
.
After a couple of hours of crying and panicking I had resolved myself to simply tell my parents that the glasses were lost and they’d just have to buy me a new pair and move on with what ever punishment.
How bad could it be? A grounding for a week? Two? Not bad, survivable certainly.
.
But my folks had other ideas.

Yes, this is really my mother. I took this picture while she was yelling at me as a young adult…
…and had it put on a mug for her that same year for Christmas. She did not like it.
.
So enraged were they about the lost glasses, that they refused to buy me a new pair, as they should have.
I was told I would not be getting a new pair, which would put my future in jeopardy because I would not be able to drive without them, heaven’s to betsy!
.
I couldn’t not learn to drive in the next year!
{Appropriate Teenage Freakout ensues}
.

Photo Credit OnlineSign
So, I headed back to Joanna’s and searched.
And searched.
And searched.
Until it was night again.
.
Defeated, I crawled back home, face puffy and red from crying all day.
.
My folks, still angry, took a small bit of pity on me, and the next day my father took me to Home Depot.
.
…To rent a metal detector.
.

Photo credit TC
.
And sent me back over to Joanna’s to resume the search.
.
It took about another hour, but lo-and-behold, I found the with the damn metal doohickey. Not even a scratch on the lenses or anything. I had never been so relieved.
.
Guess what I gave my Dad for Christmas?
.
Patrick: a metal detector?
me: Was there any question?

Of Rock and Earth

She clambered up the boulder in Groom Creek, berating herself for being out of breath. Maybe at the top she’d find clarity. She reached the apex, feeling the porous rock under her hands and appreciating it’s sharpened, pockmarked texture from thousands of years of elements and having once been under water. That she could respect; it some how soothed her. There was a time when she lived there, and though she hated the company she had kept, she could always be calmed by her surroundings. 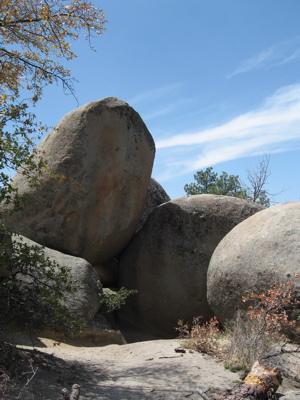 Deep sigh. Just another view. She’d seen beauty, landscapes, created dreams in her head that she lived in life, and each one lacked. She knew that it was due to her own failings in looks. Every dream had to begin with envisioning herself as attractive first, an extra step that stung each time. Everyone who lived the life she envied was pretty, plain and simple. Strength and confidence seems to attract the same. Those that she attracted were the weak and inherently flawed. She wanted maturity, initiative and certainty, something she hoped to have in herself, but wavered all too often. She became ambitious out of need, and resented it.

Through years of hardships, “Be my pillar,” he had said. “Look how I fall, look how I’m so damaged by others that I must be cruel to you, only to forget when it suits me. Be my pillar because I need.” And as she stood like scaffolding for him, arms raised, stiff, floating away from herself and her dreams, motivated by necessity rather than desire, he turned. “Oh, look, I didn’t need you after all. Didn’t need any of it. I guess I was kidding.” And faded away.

She couldn’t remember when she stopped loving him, but she knew it was before he’d come to this conclusion. Whether or not he loved her, it was not the passionate love of a spouse, but that of a child. And that, at 30 years old, was not something she could handle. But was it better to be alone, unloved in her shameful and permanent ugliness, than to be with someone who at least needed her in some sense? Where was that decision? Had she reached a point where she only wanted disposable companionship, having been used and tried to exhaustion? She was thankful there were no children to consider. Now there were sure to be none.

So, another view. Another line of sight that went on forever. It was beauty, made her ache for things that were unreal. The rocks, the stillness, the trees that harbored streams and javelina, deer and sweet smelling earth. And the gentle pine needle covered ground that soften footfalls and emotions. And she’d seen it all before and had some how hoped this time it would be different.

“I used to live here, you know. This one time I accidentally hit a javelina that ran out of the brush into the front of my truck. I stopped short; it shook its head, stood, and rammed the front of the Toyota, annoyed at my intrusion. It couldn’t have been more than 40 pounds, but it was tougher than me.” She said it softly and to no one, just sharing something that made her smile with the wind.

She loved being alone and was never lonely. Her chest and throat hurt in the sunset as she turned, knowing that she’d continue looking for something she could not identify. It was the way she’d always been. And she had accepted it.