What, oh what, does one do with a turkey fryer once Thanksgiving is past $60 worth of oil?

Well, if you’re part of my group of friends, you set out to discover what can and can’t be fried.

For safety’s sake, my friends took a direct page from Alton Brown’s book and setup their fryer outside, away from the house, spending about $5 to have the fry basket on a pulley, and wrapping the hose in tinfoil so that in the event of a spill, the hot oil won’t melt through the propane hose.

The weather was cool, the colors bright, every one felt good in the throws of Austin Autumn.

While some planning had to go into what we fried (wet batter that could drip and therefore be more likely to cause burnt bits that would blacken the oil), we started ambitiously with hot wings followed by Brussel sprouts, both fried at 350F degrees. The hot wings were tossed in regular buffalo sauce and Texas Pete Sweet & Fiery, a new favorite of mine. The Brussel sprouts took less than 3 minutes and were amazing both simply salted and sprinkled with Uchiko’s recipe.

Following our bounty of protein and veggie tables, we moved to a pallet cleansing batch of fried baguette crust, cut into strips, dipped into Nutella and served with banana slices. This was particularly satisfying.

Not everything was a success, however. We did attempt a batch of fried cheese curds, that came out more like puffs of hollow crispy shells. They also coated the basket in goo, and we had to break from frying to scrub everything and make sure the oil wasn’t going to burn do to particles. 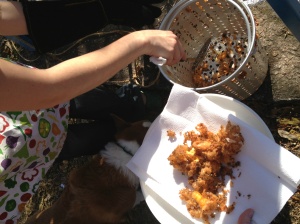 I had mixed up a batch of green chile biscuit dough, rolled into balls, and stuffed each ball with a small cube of cheese and two drops of chile oil. These were tasty, but needed more seasoning than I mixed into the dough. A good start on something, though, and they were even better the next day, making me think they may need to be a breakfast treat! 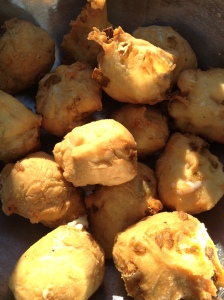 Up next were the corn dogs and, while I only got one bite, they were easily my favorite of the afternoon. And it goes without saying that they disappeared the fastest, loved by adults, kids, and X-1.

X knows where the good stuff is…

But the day wasn’t just about getting together to eat unnecessary calories. We learned, we taught each other, we enjoyed the sunshine. The was quality time… 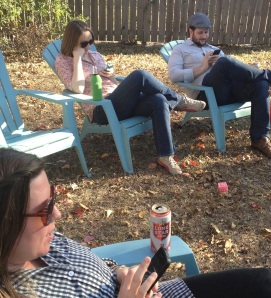 “Quality” time of the future.

We taught Nicco how to use the horn on her Batmobile and how to make deep “Tooooooot” train sounds with an empty bottle. We chatted and allowed the kids to exhaust us, using the adults and trees as jungle gyms. 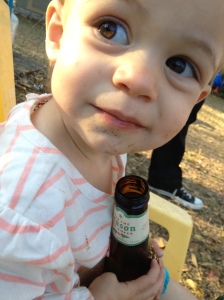 And what would an afternoon be without dessert, a dessert that appreciates Autumn’s bounty of apples, of course?! The amazing Tania whipped up two different kinds of fried apple pie, one in pie crust, and one in a simple biscuit dough, as recommended by Paula Deen. We were somewhat surprised to find that Deen’s dough was far lighter and more substantial (and far less greasy) than the simple pie dough! Both were dipped in a fantastic caramel sauce from Austin’s own Foreign & Domestic.

It was an afternoon of ease, experimentation, humor, good company, beautiful weather, and joy. It was a second Thanksgiving Day, it was perfect for a Sunday in Autumn. One final note: we did eventually get the cheese curds to come out better…though not all together perfect. When Sarah wanted to get a few more, her husband, not standing too far from the curds said “Well, kick the dog, drop the baby, and get over here!” rather than leave the table himself, because they were disappearing all too fast. (Yes, of course he was kidding! But it’s a funny picture non-the-less.)