The Void in Your Soul is Your Lack of Nakatomi Inc

I like staged houses. I really do. I like original bright art on white walls, clean lines, and a void of family photos. I like flow and bursts. Bare and pops. Simplicity and vibrancy. I like darkness turned to light. Which is why I love Nakatomi Inc.

I’m not one for plugs, but  holding back on that which is awesome is also not my style. Artist Tim Doyle takes the most memorable scenes of movies, shows, the pieces that all hit us – and not necessarily in a reminiscent way – and makes beauty where there’s bloodshed, calm silence and awe where there’s chaos. I personally have a number of his works from his Wes Anderson series. In my bathroom, a beautiful barefoot woman ties up her hair prior to cleaning another motel room (Bottle Rocket) and in my living room a well traveled suitcase is in the hand of an unseen man boarding a train (Darjeeling Limited). The prints are amazing, iconic, and beautiful pops of color in my otherwise drab living space. And the last thing any viewer ever thinks they’re admiring is a movie poster. They stand there staring, it can’t be helped, seeing something creative and really gorgeous, but also attempting to rack their brains on why they feel connected to the prints. On the very rare occasion that people recognize a print’s inspiration, they seem even that more attached to it.

In Doyle’s work I get to unabashedly feed my geek soul with scenes of my favorite stories in a very unique way, balancing darkness with bold colors, sometimes turning scenes of horror into love, or the mundane into beauty. There are scenes our minds don’t want to visualize again, but Doyle manages to capture these points and depict them in such away that soothes and states that it’s not only okay to stare, you want to stare. But his works go beyond that. Doyle’s prints give new life to a renewed Pop movement for a new generation of art lovers. His works are not only visually stunning, but imaginative and inventive without being hokey or analogous to any other artist. 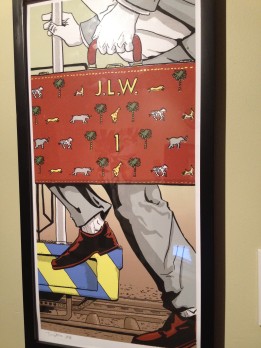 Please excuse the poor lighting in these photos.

The best way to check out Tim’s work is to check out his websites, Nakatomi Inc. If you’re lucky enough to live in the San Francisco area, you can catch Unreal Estate, a Tim Doyle solo show, at Spoke Art. I’ve known about this upcoming show for a while, but at work yesterday I had a coworker run up to me, Macbook in hand, to show me something “awesome” he found online. He revealed an image of a building near cooling towers, it may be early dawn or a dirty night, an unwelcoming, dirty parking lot, a poor part of town that is cold, but not unattractive in its honesty and industrialism. And I immediately recognized it as Tim Doyle’s piece of the Kwik E Mart. From the Simpsons.

I don’t watch Breaking Bad, but there are a few prints Doyle has done of the show that I can’t imagine I’ll live without for much longer.

Along with the Simpsons print, the Spoke Art show in San Francisco will also feature works depicting locations from The Sopranos, Seinfeld, Sesame Street, Arrested Development, and more.

I wish I could say something bad about some aspect of Doyle’s work, I really do, just to make this more of a professional review than whatever this is (merely ‘gushing over great’? I don’t know). And maybe that is the bad part: enjoying Doyle’s work means beginning a collection, because you can’t stop yourself. It means opening your eyes to further artists that you undoubtedly get sucked into enjoying as well. And before you know it, you’re deciding whether to pay money to see a movie, or just saving your cash, waiting in hope that Doyle will capture it in a print down the road.

I will not be attending the San Francisco art show as I live in Austin. I will, however, be spending my weekend obtaining a new frame and hanging the new print I purchased from Nakatomi Inc yesterday. And I can’t wait.