I’m not allergic to any thing. I’ve had a number of fancy and expensive doctors tell me this in the last couple of years. And they have all been full of shit. I had deviated septum surgery just over a year ago, because, said those expensive boys in lab coats, my severe allergy symptoms were being caused by my septum and swollen turbinates. Getting the surgery, they said, would be like breathing for the first time. Hot damn were those losers wrong. Since that time, my nose now rattles, I have worse allergy symptoms than ever before, and I’ve begun to develop sinus infections so bad that everything gets backed up to my ears and I then wind up with ear infections. A holiday season delight, let me tell you.

So that’s where I’ve been. Wrestling with the Devil in the Goo dress.

On Thursday I felt well enough to go into the office and not look like complete crap. I wore this: 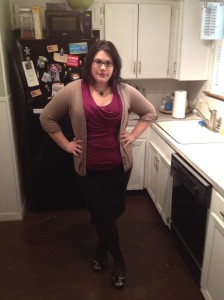 Shirt by Anne Taylor loft. All the “ruching” hides the flibberty gibbity parts of my belly. The cardigan you’ve seen before and is the boyfriend cardigan by Mossimo, the skirt is “congratulations on being just shy of needing maternity ware” by Old Navy, but I love the cut. And I don’t want to jinx it, but I’ve worn it a good three times and it has yet to fall apart, so their child labor in Sri Lanka has gotten much better. The kids that made this skirt had the dexterity of 5 – maybe even 6 – years old. Awesome. Tights from WhereEverTheHell, and the shoes are my old favorite standby, which you’ve also seen before. And my hair is a Mess, and my face makeup done by Night Time Drool & Over Tired. Maybe my hair would’ve looked better if I used this Blow Dryer Hand Gun. Personally, I love the holster. Feel Badass AND Beautiful everyday. Or just feel the release of shooting yourself in the head with the power to still get up the next morning.

There’s a new Find the Bad Kitty, Holiday Edition beginning. It started today, so check it out.

Food wise, it’s holiday season in Texas, which means incredible homemade tamales gallore. I don’t make them, lord no. But almost every amazing Taqueria in town does and they are just ridicu-mazing. Obviously, that “ridiculously” and “amazing” ‘s baby. All porky and fatty and, oh, just great.

And, finally, I recently found out that Siri is pro-life, an issue we differ on. That being said, she’s also a total fucking slut, so maybe she needs to get her priorities straight.