* So…The Hobbit is going to be 3 movies. There isn’t a script yet…or a budget…but, yeah, 3 films. [GeeksOfDoom]

* Global Warming opponents can go to Hell – and those in Oklahoma may very well be headed there. According to new reports, the current freak heat wave they’re experiencing is causing the street lights to melt. If we’re not going to alter our climate changing ways, we’ll have to at least tweak “Hot as balls” to “Hot as melting balls”. Naturally. [Inquistr]

* There have been a lot of talk about another Ghost Busters film claiming to be official. The newest comes from Cinema Blend stating that Bill Murray is officially out of any kind of future sequel. Granted, this story quotes Dan Aykroyd, but I’m still only taking it with a grain of salt. The only person who can say whether or not he’d be in is Murray himself, and even he wembles – it’s a word; look it up in the Fraggle Dictionary. The fact of the matter remains: These men are old. Like Indiana saving relics from the Nazi’s, perhaps this story should close completely. Can’t Hollywood come up with some new ideas, not simply “new-ish”? [CinemaBlend]

* The next X-Men movie has a name and it’s not “Second Class”. The next X-Men film, expected, will be called X-Men: The Days of Future Past, which to me is wordy and a bit Doctor Who-y. It’s also a fairly well known storyline of the comic book, making it a bit of a spoiler alert. This comes on the heels of set photos and video from the set Wolverine 2, which is currently filming. [HotOffThePresses, Hollywood Hills]

* There are rumors afoot that Jimmy Fallon may be in talks to host the 2013 Oscars. Lorne Michaels is expected to produce. Think he can get through any funny bits without giggling? I’m a fan of Jimmy Fallon, truly, and feel he’s definitely come into his own as a talk show host on Late Night with Jimmy Fallon. [LATimes]

* Will Ferrell is super upset about Kristen Stewart cheating on Robert Pattinson, y’all. Like, super upset. Even calls BitchFace a TRAMPire. Oh, that “bitchface” thing? She’s got super bitchface, it’s just a matter of fact. Listen, if you want me to get all girly about it, no one should be so pussy whipped that he’s willing to dip his pen in the same ink at the same time as another man. Also, she’s shit for acting, also just matter of fact. Don’t let losers drag down your own rising star. Boom. What was I talking about again? [Inquistr]

Pop It Up Now: The Hobbit, Ace Power, & So Much More

* Netflix added the next season of Breaking Bad to Watch Instantly this past weekend. Naturally, my marriage has been put on the back burner until all episodes can be watched.

* Wired interviewed Neil Gaiman and his wife, Amanda Palmer. It’s all fine and good and funny and interesting. Whatever. All I really got out of it was that I am not Neil Gaiman’s wife, and I should be. At least I’ve believed I should be since the age of 13. [Wired]

* If you haven’t heard by now, you should know: There’s a guy in the hills of Utah dressing and behaving as a goat. Some are speculating that he’s a hunter. I am speculating he’s a man dressed as a goat with 99 problems and hunting ain’t one of them. [WebProNews]

* Every time you start to think you’re cool, just remind yourself that you’re not Patrick Stewart. You are not Patrick Stewart, and you never will be. You’ve never had the accolades he’s earned from doing Shakespeare while simultaneously doing voices for Seth McFarlaine and being the Captain of the Enterprise. And you won’t run the olympic torch across London while looking super awesome doing it. [Blastr]

What the Hell Did I Just Watch: Prometheus & Moonrise Kingdom Reviews

As far as Prometheus goes, I’m doing an un-review. I say little and there are no real spoilers, period.

If you want something more comprehensive scroll down for the Moonrise Kingdom review.

I’ll keep this brief. It shouldn’t be discussed unless you’re with people who have already seen it.

I went to see Prometheus. Spoiler alert: If you’re 8+ months along in pregnancy and you go see it, you will have you kid shortly there after. I’m not kidding, totally happened to a friend of mine (Welcome, new baby Kai, to the World and Nerdom!). Other than that, be prepared to leave with a ton of questions. If you don’t walk out with at least some questions that spawn (get it?) into more questions, then you’re doing it wrong.

David. Focus on David and his agenda. I’m not a huge Alien (or Aliens or Alien Resurrection or Alien 3 or Alien vs. Predator or Alien vs. Predator 2) fan, but I do love Sigourney Weaver, puzzles, and science fiction. No, Sigourney wasn’t in this one, but I still found it to be entertaining and interesting. I’m hoping many of my questions will be answered in the sequel, Paradise, that we probably won’t see before 2014. It’s gross, it’s phallic, it’s spacey, it’s Ridley Scott. Go see it. It’ll be fun. There’s not much else on Netflix anyway.

I love Wes Anderson. I love his usage of color, his need to show viewers that it’s okay to love and lose, that the more we care the more painful it is in the end. His long shots, his simplicity, and always, always his choice in music. Moonrise Kingdom starts off much the same of his other films, the classic songs, the endless single shot that reveals a lifestyle, and blocked colors, beautiful, bright, setting our mood and the tone of his story. 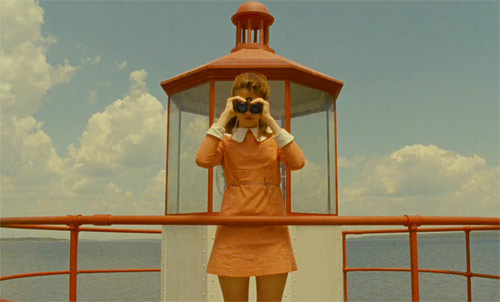 “I know what you do with that dumb policeman…” Photo courtesy of Booooooom.com

Suzy is a twelve year old girl feeling troubled. She’s on the cusp of womanhood, she has no real friends, and her mother and father, lawyers with little to no true relationship remaining in their marriage played by Bill Murray and the fantastic Francis McDormand, think her to be troubled as well. Ultimately, however, she seems pretty on the ball compared to most tweens, merely going through all those horrible bits we all had to face. Sam is also a troubled youth of 12, recently orphaned and trying just to fit in where ever he lands while being himself…which is a bit over every one elses’ heads. Both Sam and Suzy are growing up on a small island off the coast of New England, the story focusing on the summer of 1965. Shortly after meeting in 1964, Sam and Suzy become pen pals, sharing much of themselves, trusting only each other with their secrets and childish demons, until finally they hatch a plan to go camping for a few days together. What ensues is the frantic search for the children by the adults in their lives, revealing that youth – even “bad” youth – is always innocent while adults are just hot messes. Bruce Willis plays an wonderfully thoughtful and patient policeman, with Edward Norton as a stiff Khaki Scout leader who really wants to be the Dudley Doright of his troop, and Tilda Swinton as the heartless, frigid Social Services.

The shooting locations were primarily around Rhode Island and Jamestown, absolutely beautiful settings made all the more breathtaking through Anderson’s shooting style, that made me ache for my own childhood. The story itself was interesting and entertaining, but not very thought provoking. It was as if watching a very well written and enjoyable  young adult novel. It was a bit funny, a tiny bit heartbreaking, but more than anything it was relatable on a very real level. We were children once, or we have them now. It’s what we went through, what we feared, what we worry about today, and it’s a pleasure to watch. We’ve all felt left out, odd-balled, or worse – doing whatever we had to in order to be a part of the group. Moonrise Kindgom  touches on this unabashedly and goodness wins the day.

Each primary adult in the film was dressed to their own accord. The policeman and savior in white, the Khaki leader in starched tan, Social Services in harsh navy like the turbulent sea, Suzy’s father in aged sweaters and mismatched pants while his wife dresses almost too young for her age, signifying blatantly what their marriage had become to each. The Narrator is always in red, and adorable. This aided in the story telling aspect and was somehow refreshing after all the overly stressful movies, TV shows, and news that air nightly at home. 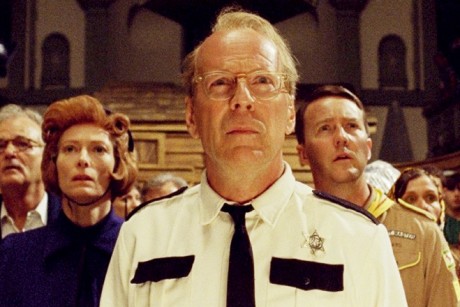 Moonrise Kingdom is simple and lighthearted in it’s writing, a wonderful interlude between the usual deeper fare, missing even the minor politics and family struggles that Anderson’s previous live-action works delved into. It’s filled with his usual honesty for the beauty we may be missing and the ugly that we sometimes prefer to ignore, flows comfortably, and is extremely entertaining. I in no way mean to intend that in being less complex than, say, Royal Tenenbaums or Rushmore this film lacked anything; it was merely a sweet story, simply told, with all the visual delight Anderson always brings to his films and was very endearing. It’s very enjoyable, and everyone in it, including to new-comers to the screen Jared Gilman and Kara Hayward, are wonderful, though my favorite ma have been the minor role played by Jason Schwartzman; the narrator, played by Bob Balaban, was also hysterical. Gilman and Hayward encompass Sam and Suzy, playing with raw innocence, and the kind of awkward determination that only children can possess. Their characters were imperfect, the actors themselves perfect, making the viewer remember, at times uncomfortably, exactly what those years of life were like.

I recommend Moonrise Kingdom for the Wes Anderson fan or those just searching movie theaters for a more upbeat alternative to Spiderman, Prometheus, or Avengers. It’s summer, but we don’t have to to have Action Flick boners to see an excellent film. And you don’t have to take my word for it: Moonrise Kingdom got a 95% on RottenTomatoes! It’s funny, a good date movie, and a great summer flick when you get tired of gratuitous explosions, films that cost hundreds of millions for no obvious reason, and bloodshed…though Moonrise Kingdom has that, too. 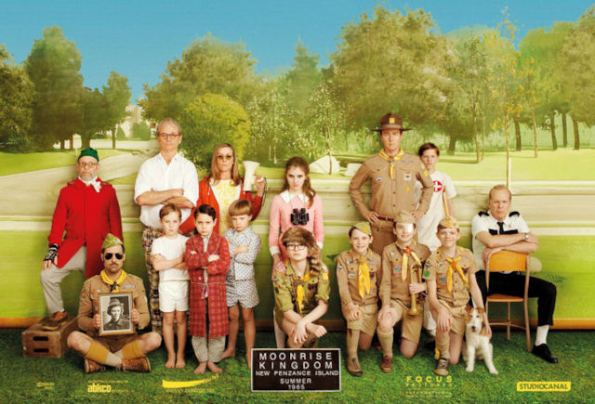 I was going to do this post about life and crap, and maybe I still will later, but for now…

SPOILER ALERT! If you don’t want to hear about Star Trek 2 RIGHT NOW, then go away.

Good. It’s about to get real.

I mean, we knew that. You knew it, I knew it, we all felt it. Like falling in love with someone you shouldn’t. People deny it, tell you it’s wrong, but you wake up in the morning and there it is:

A big thank you to Sarah B. for making my morning a little more exciting.