Tonight’s entree was braised short ribs with a red wine reduction. And because that’s simply not fattening enough, my husband made Yorkshire pudding out of the drippings. A meal so dripping in its own fat that the eaters will have shiny faces by the time the plates are empty.

This recipe takes 3 – 4 hours, so start a while before you want to eat.

Lots of fresh minced garlic. I used 8 or 9 cloves, at least 4 of them rather larger.

3 cups red wine (And one for the chef!…I mean just finish off the bottle by pouring it in a glass and drinking it. Do a little something for you in all this.)

I bought 3 1/2 pounds of short ribs, cut them off the bone, and browned the meat. I chose to debone to cut out a ton of greasy fat I didn’t want to have deal with later. The gelatin in the recipe will retain the bone flavor, however, and makes for a silky, smooth sauce in the end. 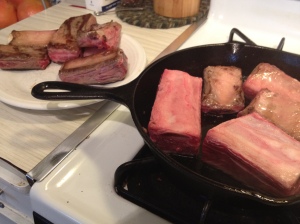 Once I browned the meat I poured all, but about a tablespoon of the drippings out of the cast iron pan into a separate bowl for Yorkshire pudding. We’ll get to this later on. It’s best to use a dutch oven for this recipe, but I don’t own one, so I used a regular stock pot. In the stock pot I browned 1 large, chopped onion in that last remaining tablespoon of drippings I mentioned two sentences earlier. I didn’t want the onion to brown too quickly so I sauteed, stirring quite a bit, for 10 minutes or so. Next came the tomato paste, which browned fairly quickly. I added the garlic cloves, stirring until they were just aromatic. At that point I preheated my oven to 300 degrees. I then poured in the red wine over the onion, tomato paste, and garlic and deglazed the pot. I let the red wine simmer away and reduce to about half.

Once the red wine got nice and thick, I added a cup of low sodium beef broth, the bay leaf, ginger, and, finally, the boneless and browned short ribs. Once this mixture was at a simmer, I covered it and slipped it into the preheated oven for 2 hours. While waiting I read most of The World According to Clarkson while Chip put together the LEGO White House.

Those 2 hours took forever. I took the stock pot out of the oven and set it aside while I bloomed the gelatin. In the 1/4 cup of cold water I sprinkled the gelatin and let sit for 5 minutes or so. Gelatin needs to bloom in cold water for at least five minutes, other wise the consistency won’t be as smooth. While the gelatin was doing it’s thing I removed the short ribs and carrots from the pot, plated them and tented the dish with aluminum foil. I then strained the remainder of the stock pot contents in to a large pyrex measuring up and placed it into the fridge, chucking the solids left in the mesh strainer. I let the fat rise in the pyrex for about 10 minutes. After straining the fat from the liquid I poured the liquid back into the stockpot and heated it over medium high heat until it reduced to about 1 cup, just a few minutes. Removing from heat, I whisked in the gelatin. This is a perfect time to taste the sauce and make sure it has enough salt and pepper to your liking.

a pinch of salt

Preheat the oven to 450 degrees. Beat together the milk, flour, eggs, and salt. In a 3 quart rectangle glass dish pour the meat drippings and place in the oven. Get those drippings smoking hot – super, sizzling hot, about 8 – 10 minutes. Remove the pan frm the oven and Carefully pour the custard mixture of milk, flour, and eggs into the sizzling hot drippings.

Replace the rectangle dish back into the oven to cook at 450 for another 10 minutes or until it reaches your preferred pudding texture. You can make it as chewing or as crisp as you like. When it’s done it’ll look like…

Once the yorkshire pudding was out of the oven, we de-tented the short ribs and carrots, poured the reduced sauce over the top, added basic mashed potatoes and steamed asparagus to the mix, and sat down to an awesome Christmas dinner.